For over 150 years, College Park has been a center of education, experimentation, and exploration, a place where creative minds pursued innovations first in agriculture, then in flight, and today  serves as the home of the flagship campus of the University of Maryland.  The Maryland Agricultural College was founded here in 1856 to support scientific research and education in agriculture to bring prosperity to Maryland farmers.  Fifty years later, in 1909, the Wright Brothers found College Park the perfect place for an airfield where they could continue their experiments with flight and train the first army pilots.  Other forms of transportation also were important to the development of College Park, including the Baltimore-Washington Turnpike (now Route 1), Baltimore & Ohio Railroad (now CSX), and the Washington streetcar system.

Around 1820, the Baltimore-Washington Turnpike was the first transportation artery to be constructed through the area, enabling stagecoaches to travel more easily between Baltimore and Washington.  In 1835, the B&O Railroad extended its line south from Baltimore to Washington, and the station stop in the area now known as Old Town College Park was dubbed “College Station” after the Maryland Agricultural College was established.  Additional railroad stations were built at Branchville and Berwyn.

The Maryland Agricultural College was one of three similar academic institutions that preceded the Morrill Land Grant Act of 1862, which supported the creation of 65 other agricultural and mechanical colleges around the nation. The driving force behind the creation of the college was Charles Benedict Calvert, owner of the vast Riversdale plantation (which extended over 2,200 acres including the southern portion of present-day College Park and part of the current University of Maryland campus).  Calvert recruited other wealthy planters to support his vision for scientific experimentation to improve the productivity of Maryland farms and educate the sons of Maryland farmers.  Although the college struggled in its early years and Calvert’s vision was slow to materialize, in 1888 the Maryland Agricultural Experiment Station was launched to conduct research on propagation, fertilizers, soil analysis, insecticides, and other practical topics. The Farmer’s Institute (later the Maryland Extension Service) began to disseminate the new scientific agricultural research in Maryland though seminars, displays, pamphlets, fairs, and contests.  In the 1910s, the college began to evolve into a more broad-based institution of higher learning and was renamed the University of Maryland in 1920.

The electric streetcar accelerated the growth of the community as a “streetcar suburb” of Washington, D.C. by making it easy to travel to downtown Washington and other destinations on the system.  The “Maryland Line” first opened service from downtown Washington to Hyattsville in 1899 and was extended to Berwyn in 1900 and then to Laurel in 1902. The streetcar system served the College Park community for nearly 60 years, ending in 1958; it was to be 35 years before the Metro “Green Line” service to College Park began a similar route in 1993.  The demise of the streetcar system was due in part to the growing popularity of the automobile and bus transit, with the one-time Baltimore-Washington Turnpike evolving into Route 1, the nation’s first highway.

The College Park Airfield, established by Orville and Wilbur Wright, also attracted new attention to the growing community.  Although the Wright Brothers had hoped that relocating their training ground from Fort Myer to the more remote College Park location would reduce the size of the crowds of onlookers, the spectators followed them to the new airfield to watch the daring young men in their flying machines.  Many aviation firsts were accomplished at the College Park Airfield, including the first mile-high flight (1912), first flight of the U.S. Postal Airmail Service (1918), and first controlled helicopter flight (1924).  Radio navigation also saw significant advancement at the College Park Airfield, and the National Bureau of Standards’ work on the development of radio navigational aids at the College Park Airport resulted in the first successful “blind flight” using only instruments to guide the plane (1933). Over the subsequent decades, the airport continued to serve small planes and earned its distinction as the oldest continuously operating airport in the world.  The College Park Aviation Museum, opened in 1998, offers fascinating exhibits about the history of flight to educate today’s flying aficionados both young and old.

The earliest communities that comprise present-day College Park were Branchville, Berwyn, Lakeland, and the neighborhood that was once called College Park and is now known as Old Town.  In 1867, a post office was established to serve the fledgling Branchville community.  Neighboring Berwyn began to develop in 1891, as did Lakeland, named for the lakes that were used for swimming, boating, ice skating, and a commercial goldfish farm (approximately in the same location as today’s man-made Lake Artemesia).  Lakeland, initially designed as a lakeside resort, became a close-knit and significant African-American community.  To the south, John Oliver Johnson purchased land in 1890 from Ella Campbell, a Calvert heir, subdivided the property, and named his new development “College Park.”  The next neighborhoods to be developed were Daniels Park (1905), Calvert Hills (1907), and Hollywood (1920s and 30s), followed later by Hollywood on the Hill, Yarrow, College Park Estates, College Park Woods, Autoville, and Sunnyside.  College Park incorporated as a town in 1945 and today is a thriving city with nearly 30,000 residents.

Want more information?  For the History and Heritage of Daniels Park and Hollywood, click here.

In honor of Women’s History Month, the City honors those women who served or are currently serving on the City’s Mayor and Council.  We thank them for their contributions to our City and look forward to the many years of continued female leadership!  Below is a list of those who have or are serving and the years they served. 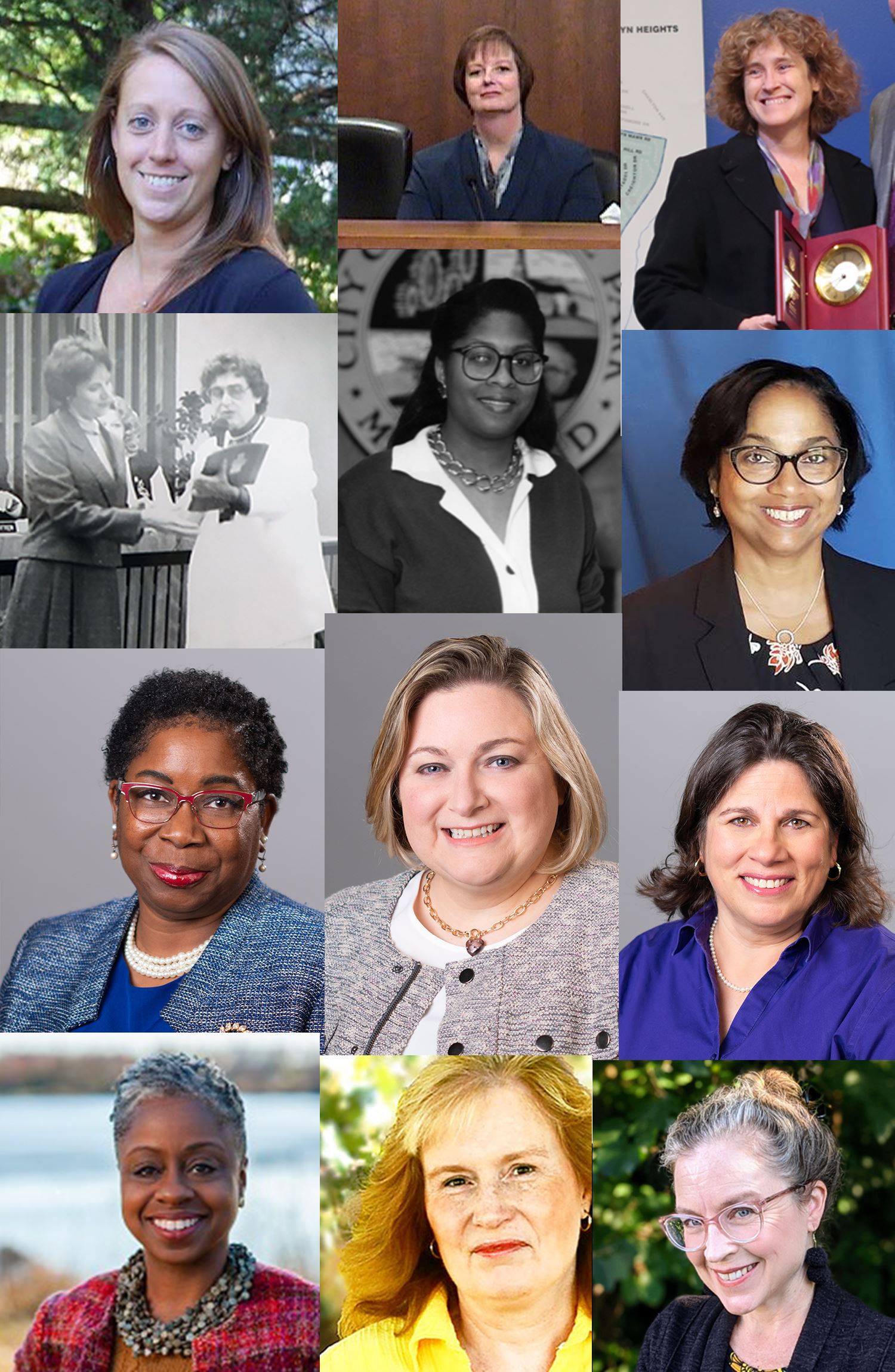 The City of College Park provides open and effective governance and excellent services that enhance the quality of life in our community.

The City of College Park is a vibrant and prosperous top 20 college town, which has established collaborative relationships with the residents, the University, businesses, non-profit sector, and other governments that benefit the entire community. The City is known for distinctive and connected neighborhoods, thriving commercial districts, cultural amenities, attractive green space and streetscapes, convenient transportation systems serving all users, and a strong sense of community pride.

Goal 1: One College Park
The City of College Park and its residents, the University of Maryland (UMD) and its students, faculty and staff, and all stakeholders are connected to the community and work together for the best interest of College Park.

Goal 2: Environmental Sustainability
The City is a leader in the protection and restoration of natural resources and the implementation of energy efficiency and renewable energy programs, technologies, and plans.

Goal 4: Quality Infrastructure
The City’s infrastructure, including roads, sidewalks, paths, technology, utilities, parks, playgrounds, City Hall, and other City facilities are constructed and maintained at a high quality standard and meet the needs of residents, employees, and visitors.

Goal 5: Effective Leadership
The City models excellent leadership and teamwork among Council, staff, and community partners to achieve the City’s vision and goals.

Goal 6: Excellent Services
College Park has high quality, consistent, and cost-effective services in every department that contribute to a desirable, welcoming, and safe City.

Open and Effective Government
The City conducts its business in a lawful, open, and democratic manner. The City values communication and public discussion on issues affecting the City.

High-Performing, Dedicated, and Valued Employees
City staff provide the highest level of service possible. They act with honesty and integrity and are empowered to solve problems. The City values and rewards excellent performance.

Sustainability and Long-term Planning
The City is committed to a sustainable built environment and active stewardship of our natural resources. The City’s long-term planning contributes to the well-being and prosperity of our community.

Collaboration
The City values teamwork across departments and between Council and Staff. The City will strive to have productive, collaborative relations with the University, the County, the State, and neighboring jurisdictions in order to improve the City and the region.