The City of College Park has a council-manager form of government. The City Council, as the elected leadership, is the governing body of the City. The Council appoints and directs the City Manager, who provides the management and oversight of all City services, implements policy established by the City Council, and appoints and supervises department heads. The City Manager also serves as an adviser to the City Council by providing objective feedback and long term consequences of policies under consideration.

Mr. David M. Thornton was hired on July 6, 2021, as our new Racial Equity Officer. In this capacity he will be responsible to look at City policies and services through a racial equity lens and speak up when a City policy might, unintentionally, exclude residents who are LGBTQ, persons of varying disabilities, ethnic or racial minorities, or otherwise perceived as different. He will also be a friendly ear to residents who want to bring such issues to the City government and who are afraid they will be dismissed or misunderstood. Mr. Thornton can be reached at dthornton@collegeparkmd.gov.

For all Media Inquiries:
cpcommunications@collegeparkmd.gov

On September 21, 2021 the City of College Park is announced the appointment of Kenneth “Kenny” Young as its new City Manager.  Announced during the September 21 City Council meeting, Mr. Young’s tenure with the City begins on September 27, 2021.  Mr. Young brings to the City more than 25 years of progressive local government and private sector experience.  “The Council and I are thrilled to welcome Mr. Young to College Park. With his decades of experience in local government, he will bring vision and skillful management as move forward through these challenging times, recover from the COVID-19 pandemic and continue to build a stronger College Park” said Patrick L. Wojahn, Mayor of College Park.

Mr. Young has a wealth of experience leading counties, municipalities, and departments across the country.   Mr. Young most recently served as County Administrator for Goochland County, VA where he oversaw a budget in excess of $141 million and 175 employees.  During his time at Goochland, he directed and supervised operations of all County departments and guided the organization through the COVID-19 pandemic with one of the highest vaccination rates for residents within the State of Virginia.

Prior to serving in Goochland, Mr. Young was the Assistant County Administrator for Loudoun County, VA, an organization with more than 4,100 employees and budget of $3.2 billion.  There he oversaw several departments including Building and Development, Planning and Zoning, Economic Development, as well as major projects like the county-wide Comprehensive Plan. Under his leadership, the county was recognized for the most business investment for counties of its size in America.  Previously, Mr. Young served as Assistant Town Administrator for the Town of Capitol Heights, MD and as an acting assistant City Manager for the City of North Las Vegas, NV. He has also held positions in economic and community development, neighborhood services, and planning.

Mr. Young is a Credentialed Manager from the International City/County Management Association (ICMA) and a member of the National Forum of Black Public Administrators, having previously served on their Executive Board. He received his master’s degree in Public Administration and bachelor’s degree from New Mexico State University. “We are really pleased to welcome Mr. Young as our new City Manager;” said Bill Gardiner, Interim City Manager, “he has great success leading public organizations and will help us reach our strategic plan goals.”

“I am really looking forward to working with the City of College Park community, City Council, and staff in achieving the goals of the community” said Mr. Young. “College Park is an amazing place and I feel very fortunate to be joining and leading the City team.”

Bill Gardiner grew up in LaPlata, Maryland and attended Wake Forest University (B.A., Politics) and the University of Maryland (M.A., Urban Planning). He started his local government career as a planning / economic development intern for Terry Schum in the late 1990s! Bill has more than 10 years of experience in economic development at the Prince George’s County Economic Development Corporation, where he was Director for Business Resource and Project Analysis. Bill was responsible for new business development, project management, research, and collaboration with M-NCPPC and the federal government.

Bill was elected Mayor of the City of Hyattsville and served for eight years. As chief executive of the City, he worked closely with City Council, staff, community organizations, and other government entities to modernize services and policies and increase investment. Bill has completed the Maryland Municipal League Academy of Leadership, and is a member of the International City/County Manager Association.

Prior to joining the City of College Park, Bill and his wife, were in Santiago, Chile, where his wife had accepted a faculty position in the School of Education of Catholic University. In Chile, Bill worked as a grant writer and editor for an international non-profit, and completed academic editing and translations for professors. He is very pleased to return to this area and have the opportunity to work with the City of College Park. 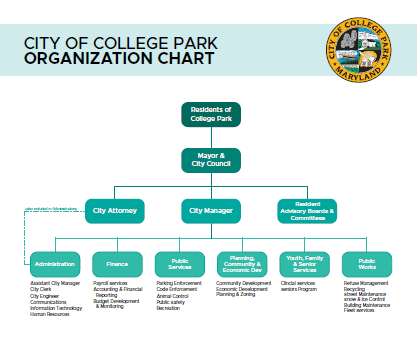 In February 2020, the City Council engaged Performance Breakthroughs, Inc. (PBI) to facilitate the update of our plan and assist staff in developing performance measures.  COVID-19 has delayed the project, but we are on track to launch the new plan in early 2021.

Since the spring of 2020, the City has held a dozen virtual focus groups and received a couple hundred survey responses on the vision for the City and current strengths and challenges.  PBI provided the City Council a briefing of the data from those meetings and outlined the process to develop the new plan.  From August through November PBI led Council through developing a new vision, and mission for the plan.  Several public meetings were held at The Hotel in order to meet in-person and have space to maintain social distancing.

The City Council discussed and ultimate adopted the following vision and mission for the City’s 2021 – 2025 strategic plan:

Mission: We provide excellent services, transparent and inclusive governance, and advocate for our residents to enhance the quality of life for our diverse community.

Vision: College Park is a vibrant forward-thinking City with a welcoming community that celebrates our history and diversity and strives for innovation, connectivity, and sustainability.

The Council’s next step was to develop Five-Year Objectives and Key Results (OKR).  This OKR methodology has been used by numerous successful companies to create high performing organizations and was recommended by our consultants.  The City Council met several times to develop the Five-Year OKRs and on November 17, 2020 approved this document.

City staff are developing one-year and quarterly objectives and key results that will enable the City to accomplish the five-year objectives.  Staff are also evaluating different software tools to collectively monitor and update the plan.  PBI has been assisting in all of these efforts and will provide the final plan for Council consideration in January 2021.

Please visit www.collegeparkmd.gov/councilmeetings view or listen to Special Council Meetings to develop the plan and to see other information related to the new plan.  If you have any questions, please contact us at strategicplan@collegeparkmd.gov.

The 2015 - 2020 Strategic Plan will guide City services and investment so that resources are focused to reach the City’s goals.  The Council and staff will regularly review the plan and make changes when appropriate. Residents and other stakeholders will be informed of the City’s progress in implementing the Action Plan.

In October of 2015, the City Council unanimously expressed support for the City Operations Sustainability Plan and requested that the City Manager begin implementation.  The plan was developed by an inter-departmental task force, created at the direction of Council in 2014.  The purpose of the task force was to develop a plan that would:

You can download the plan by clicking here.  You can also download the Executive Summary, the Implementation Table, the Appendix, and the Resource Guide.  Please note that this plan is for City operations, and is not a community-wide sustainability plan.

If you have comments or suggestions about the plan, feel free to contact the City Manager’s Office.  As always, you may contact your Council members to provide comments and suggestions.

The City has conducted City-wide surveys to analyze City services, communication, quality of life and more of its residents.  In 2017, the City launched its first scientifically representative survey of the City of College Park community.